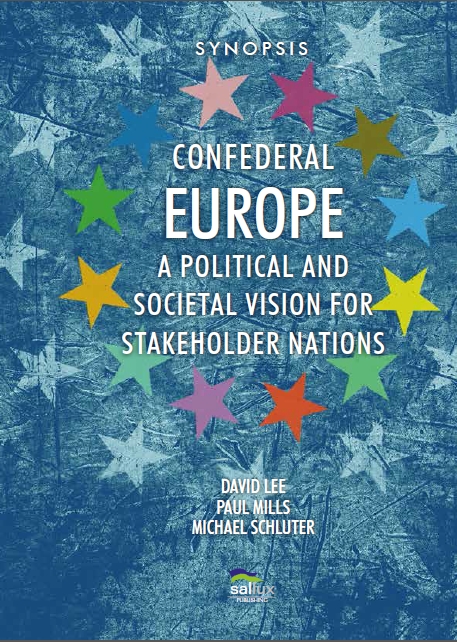 BRUSSELS, 28-Mar-2019 — /EPR GOVERNMENT NEWS/ — As the EU is approaching the next European Parliament elections there is more need than ever for a constructive middle ground between ‘more Brussels’ and ‘no Brussels’. The ‘Confederal Europe’ project aims to provide a positive case for confederal reform. It is possible to be pro-EU without allocating more competences to the EU institutions. Sallux presents its second publication in the ‘Confederal Europe project’ that emphasizes the relations between the peoples and nations of Europe and is pointing a way forward based on the Judeo-Christian roots of the EU in the spirit of the EU founding fathers.

A free copy of the new publication: Confederal Europe: A Political and Societal Vision for Stakeholder Nations (ISBN: 978-94-92697-15-8) will be distributed in the room! (value: € 10,00 postal costs excluded)

We look forward to meet you at the Launch of this publication.

Recent media reports indicate that advocacy groups found over two thousands voters who were assigned to the wrong state House, Senate or congressional districts. This information was gleaned from a “spot analysis” of six counties including: Wake, Durham, Wayne, Wilson, Robeson and Richmond. According to these reports, over two hundred of these voters received the wrong ballots on Election Day. Advocacy groups contend that black voters are much more likely than white voters to live in split precincts, which is the root of the issue.

One of the more impacted areas was the former NC Senate District 7 (Franklin, Granville, Vance, and Warren), which was carved up sending Franklin county as well as portions of Wake county into the newly formed NC Senate District 18.  This forced 4-term senator, Doug Berger, into a new district where he is unknown to many of the Wake county voters.

Senate districts were redrawn by the Republican majority during the last legislative session. To accomplish this, Thomas Hofeller who lists his present occupation as, “Redistricting Consultant at Republican National Committee,” was employed. According to Senator Rucho, who served as the Chairman of the North Carolina Senate Redistricting Committee, Hofeller was employed to provide “the technical expertise.” Hofeller also lists years of work at the United States Department of Agriculture, which has its own checkered past regarding race relations.

As John McCain continues his run for the White House, a former Capitol Hill insider is making public an explosive revelation: John McCain is in league with a transnational, Israeli-backed criminal syndicate.

In Guilt by Association: How Deception and Self-Deceit Took America to War, Jeff Gates, former counsel to the U.S. Senate Committee on Finance, chronicles the American government’s decades-long descent into corruption and treason, culminating in this year’s presidential election while the nation is waging a war for Greater Israel.

According to Mr. Gates, politicians backed by organized crime—McCain among them—have orchestrated the nation’s decline in the pursuit of a Zionist agenda. Ongoing offenses that can be attributed to McCain and his co-conspirators include:
• Supporting Russian oligarchs—the bulk of whom qualify for Israeli citizenship—who stole hundreds of billions of dollars from their own people.
• A hostile stance toward the Russian government, reigniting Cold War tensions.
• Meeting abroad with a Russian mafia boss banned from the U.S.
• Links between McCain’s political career and senior operatives of transnational organized crime spanning two decades.
• McCain’s complicity in his father’s cover-up of Israel’s murder of thirty-four Americans aboard the USS Liberty in 1967.

“The facts confirm that this war-hero politician was picked, prepped and promoted as only the latest in a series of corrupt presidential candidates,” says Mr. Gates, whose book is endorsed by Ambassador Edward L. Peck, Congressman Paul Findley and M.I.T. professor Noam Chomsky.

The first book in the upcoming Criminal State series, Guilt by Association chronicles how a trans-generational criminal syndicate affects American politics through agents and “assets” within the government itself—including lobbyists, members of Congress, Congressional staff and even presidential candidates. “This syndicate is to blame,” says Mr. Gates, “for offenses ranging from the war in Iraq to the current financial crisis.”

A widely acclaimed author, lawyer, investment banker, political advisor and consultant to government, corporate and union leaders worldwide, Jeff Gates is also a former counsel to the U.S. Senate Committee on Finance. His previous works include Democracy at Risk: Rescuing Main Street From Wall Street and The Ownership Solution: Toward a Shared Capitalism for the 21st Century. Endorsers for these books include CEOs, heads of state, legislators, commentators and Nobel laureates in peace and economics.

This book is available now. For more information, or to order Guilt by Association, go towww.criminalstate.com.