City Council Candidate Aaron Fraser is angry at the way in which New Yorkers are being treated in the Federal stimulus package. He will express his ire by leading a citizen’s march on Capitol Hill on March 28, 2009. Marchers will ask politicians to consider New York’s contribution to the overall health of this 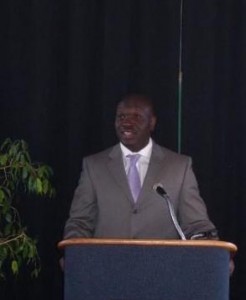 nation’s economy, which is vastly out of proportion to what the state is being allocated in the stimulus package.

According to Fraser, “I am gravely concerned that New Yorkers will not get their fair share of the stimulus package. That share should reflect our tremendous contribution to this nation’s economy as well as to the world. We have taken the chitterlings from Capitol Hill for far too long. We want a side of beef. Before bridges to nowhere are built; before greedy politicians fill their coffers with cash for their pet projects; the people of New York, you and I, should demand our fair share.”

New York is the hub of international trade and commerce. Aside from being the largest regional economy in the United States, it is home to over 160 different languages and the largest stock exchange in the world. It has commercial real estate worth $802.4 billion and is home to the seventeenth largest economy in the world. New Yorkers contribute over a trillion dollars to this nation’s GDP, which equates to a little over 9% of its total. The City’s budget is larger than the budgets of forty of the U.S. States, including the two U.S. protectorates. The top 25 Fortune 500 companies have headquarters here, not counting others on the exchange who rank lower but have primary offices here. New York is home to half of the 32 largest Chinese corporations.